The Serious Lenses have spoken – my portfolio made the grade and, when their decision is ratified by the Very Serious Lenses at Royal Photographic Society HQ in Bath, I will be entitled to style myself Bassman LRPS. Woo hoo!

My and Matchgirl’s day began around six, four hours after I got to bed following Shaker’s gig in Conon Bridge. By seven we were on the road, my painstakingly prepared and extremely valuable photograph collection contained in Matchgirl’s red and green shopping bag because I’d forgotten to ask Mrs Snapper for the portfolio case she’d offered to lend me.

Three hours later, after the usual fun run down the A9, we arrived at the Smith Museum and Art Gallery in Stirling and found our way to the auditorium where the candidates’ snaps were to be displayed in turn (anonymously) for the judgement of the Serious Lenses and education of the aspirant Licentiates.

The first panel (that’s official RPS-speak for portfolio) went on show at 10.30am; ten minutes later, when the Serious Lenses emerged from their huddle, the Lens Captain announced that all its creator’s efforts had been for nothing. Photography can be a cruel business, although the failed applicant remained anonymous. A second panel was judged with equal dispatch, but better results for its snapper whose name was then revealed.

Thirteen more panels were assessed before lunch, none of them mine. About half were successful – a ratio maintained throughout the day. 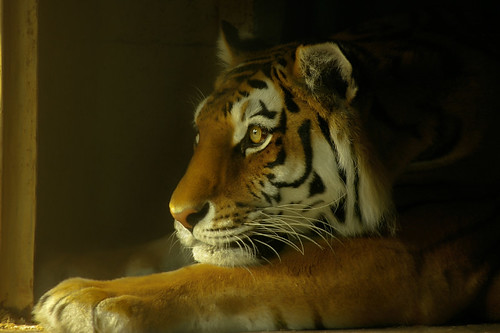 One of my favourites from my panel. Matchgirl prefers Bess, of course
My moment came thirty minutes into the second session. On the display stand, The Magnificent Ten looked professional and drew no negative comments from the Serious Lenses’ spokeswoman. The selection and layout won praise, as did the quality of the printing – Mr Snapper (who’s the technical expert in the Snapper household) will be pleased. When my name was called, the relief was immense. I can’t imagine how disappointed those who failed must have felt.

A couple of contenders must have guessed what was coming unless they were seriously deluded, especially the chancer who put prints inside pre-cut mounts of the wrong dimensions. Others must have had more of a shock. One set of well composed weddings snaps failed because detail in the dresses was blown out; a set of glamour shots (no, not nudes) got the elbow because the shadows were too deep and also lacked detail. Other panels suffered from suspect colour balance, sharpness issues or poor lighting.

I’ve had the benefit of the knowledge imparted by Philip the Photoactive guru and Mrs Snapper, who drilled into me from the beginning that Serious Lenses regard blown highlights with the same affection that Dracula has for garlic. I also benefited from submitting A4 prints – bigger is not necessarily better, I discovered, as did the failed applicants who blew up their images until the pixels squeaked.

The assessment over, winners and losers collected their portfolio cases from a back room (mine was easy to find among all the sober black) and went home to celebrate or think again. The next rung up the RPS ladder is Associate, which requires fifteen images and evidence of personal artistic vision. I’ll think about it.

Music Update: Last night’s gig feels like old news after today’s drama, so I’ll content myself with reporting a successful evening, despite many music-lovers deserting Easter Ross for the Loopallu music festival in Ullapool. Matt kept hold of his drumsticks most of the evening and Garry managed to keep singing despite being flashed by a boisterous female relative. And You Shook Me went down a storm.

Medical Update: Bess continues to improve. She even appears to be enjoying her stay at Animal Hospital where she’s spoiled by Dr Death’s assistants. Matchgirl fears she may not want to come home.