Anyone who didn't read the last entry properly (and there seem to be one or two of you) may wonder why the blog has gone quiet. That's because the regular update has moved here. Click on the link if you want to stay in touch.

It's time to say goodbye to LiveJournal – my blog has moved to my website. Click on www.russellturner.org/blog.asp then save the page in your browser's favourites to keep track of life at The Rural Retreat.

Being employed – voluntarily – for only three days a week, you'd imagine that workday stress would be a thing of the past. Not so.

This has not been a fun week at the headquarters of the Great Northern Media Empire. If the crew of the Ocean Guardian strike a gusher off the Falklands I could be tempted to retire early, but there's still no news from the South Atlantic. The value of my share portfolio continues to decline. Life can be hard.

It's tough for Matchgirl too. She returned from Shetland yesterday and shortly after that suffered the post-flight migraine that can no longer be regarded as coincidence. She's clearly allergic to FlyBe's teeny, propeller-powered island-hopper.

Her recuperation today has demanded the sofa and daytime TV, of which I'm not a fan. Angela Lansbury, Dick Van Dyke, antique auctions and property shows are bad enough, but Deal Or No Deal is the devil's work.

So after an exciting trip to Tesco I escaped to the sanity of my Mac where I improved my Photoshop skills by turning three Namibian cheetah snaps into one artistic image. All being well, more real photographs (although probably not of cheetahs) will be taken this weekend. 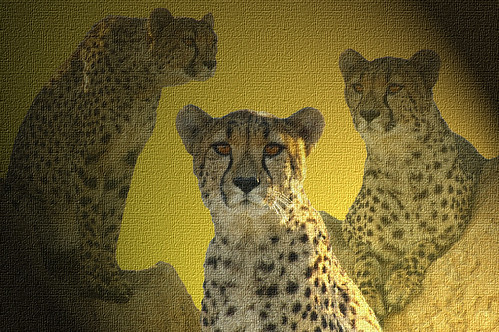 There have been big changes just beyond the boundary of The Rural Retreat's broad acres. Last week, Matchgirl and I bid farewell to Mr and Mrs Snapper and the Snapperettes, who've been seduced by the bright lights and cosmopolitan delights of Cromarty. We'll miss them.

I'll particularly miss her printer, which is why I've splashed out on one of my own – a very fine Epson R2880 A3+. But that's another story.

We've yet to get to know the new tenants of the neighbouring property – a couple with a sprightly young daughter and a teenage son – but their cat has already been seen exploring his new surroundings. Bess is not impressed.

The black and white interloper, Romeo, is six months old and already bigger than our petite puss, so it's fortunate that he's more inquisitive than aggressive. Voices have not been raised, but several staring competitions have taken place. I suspect that the phoney war won't last forever.

As Matchgirl had abandoned me this morning for business in Shetland, I amused myself by putting more charge into Kawasaki San's desperately depleted battery, then putting the battery inside him. Jump leads were still required to get him going, but go he did – up and down the drive a couple of times.

Jump leads were required again after I switched off while his tyres were inflated, so this year's first venture on to real roads was made with care. If he stalled I'd be stuck. Eight miles later we were safely home and it felt like I'd last ridden him four days ago, not four months.

His next run will be on Monday – to RM Motors for a service and after-winter check-up. The mechanics there are doubtless already planning the summer holiday they'll be able to afford when I've paid my bill.

Not much photography took place today, and that which did wasn't inspired. The best I could manage was a couple of distant heron snaps, made slightly more interesting with Photoshop. I'll try harder next time.

Another fine day, so there were no excuses for not getting into the garden. The work has to begin somewhere.

First item on the agenda was a bonfire to dispose of a year’s accumulated debris and make room for more. Unfortunately my pyromaniacal efforts were a dismal failure, but whether the cause was too much breeze, too little breeze, too small a seat of fire, damp wood or too big a heap I couldn’t say. How difficult can it be to start a fire? Teenage yobbos with a box of matches have no trouble.

Matchgirl and I resisted the temptation to help things along with four-star and left two scorched heaps for another attempt another day. All advice is welcome, especially from

The rest of the morning was spent pruning, raking, turning, levelling and dumping, much to the annoyance of the local birdlife. Significant progress was made; when we’ll make more is another matter. We like to take our time about such matters.

Further spring-related work was carried out in the afternoon when the cover was taken off Kawasaki San, who’s not moved a wheel for several very cold months, and his battery removed for charging purposes. This may take some time, as the GTR’s electrical system, unsurprisingly, was totally dead. I’ll refit it tomorrow to see what happens.

More surprisingly, after months of neglect, was that Kawasaki San appeared to be in reasonable condition. What he’ll feel like out on the road may be another matter – one I hope to discover tomorrow. Fingers crossed.

A mild almost-spring day made this the perfect time to begin the garden’s after-winter tidy-up. But lethargy was rampant in The Rural Retreat and nothing was done. Maybe tomorrow.

Our laziness paid dividends. Not only did we see two great spotted woodpeckers in the garden at the same time – something unlikely to happen if we’d been crashing around our estate on a petrol-powered lawnmower while armed with garden forks and pruning shears – but I got photographic proof too. 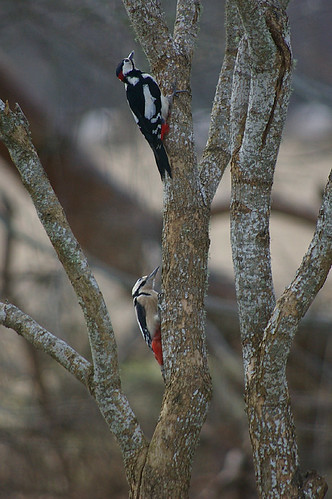 The snaps aren’t brilliant, for I had only seconds to get them both in frame and in focus, and they were fooling about in The Nutella Tree, which is a bit distant for small-to-medium-sized bird photography. However, as a record of the event the snaps are great. And there may be another opportunity another time.

I didn’t see whether the birds were a pair or two males. Observations will continue. 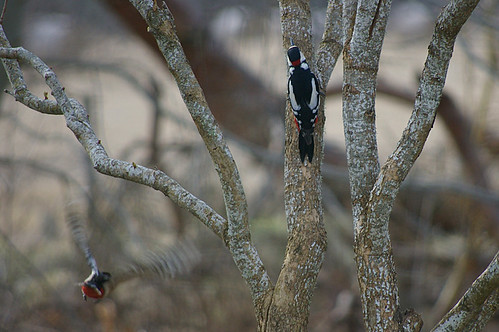 Anyone who thinks they’ve had bad luck recently should spare a thought for Mike, my former best man, and his moll Michelle who recently took part in an epic holiday to mark two milestone birthdays.

They avoided the earthquake in Chile during their cruise around South America and the Falklands, and were not among the ship’s passengers who were put into quarantine when a vomiting bug swept through the decks. The real bad luck began when they returned home to discover that their home had been gutted by a chimney fire.

Their cats survived, as did the house-sitters. I’m not yet privy to the full details. I’ll keep you posted.

Matchgirl has had second thoughts about her new acquisition's gender – she now believes that her Mini Cooper is male.

She's unable to give reasons, beyond the fact that a girl knows these things.

The driver was quite tickled by the suggestion that he be named Tommy, but as an avid fan in her youth of Twin Peaks she's been unable to resist christening her (now not-quite-so) shiny vehicle in honour of FBI Special Agent Dale Cooper, heartthrob leading man of the bizarre cult series. Here's his picture, especially for Matchgirl.

Henceforth, her Mini will be known as Agent Cooper. Whether he'll demand cherry pie and a damn fine cup of coffee remains to be seen.

My own activity today has centred around puffins. Several of the snaps I took on Shetland last year have been turned into a jaunty video, complete with totally appropriate music. Check it out below.

My work for the Chief Gnome was carried out so efficiently today that there was nothing left for me to do at Great Northern Media Empire HQ after lunch, so I got the afternoon off. It felt like getting out of school early.

The bad news, as a penurious freelance, is that I don’t get paid for the afternoon, and – with typical timing – the glorious blue skies we’ve enjoyed for the past two days disappeared at almost the moment I heard the door of GNoME’s grim portal slam behind me.

So I spent my unexpectedly free afternoon with a good book. Simple pleasures.

Band Update: Yesterday evening, Monkey Bones (minus Jim) fought through the snow drift created by the microclimate that makes Gordon’s studio such a challenging place to reach. Even his 4x4 was parked at the bottom of the drive. Progress is still slow, but we’re getting there.

It's been a crisp day with snow-topped mountains breaking a bright blue skyline – the kind of day that's perfect for getting out with the camera and making the most of Highland scenery.

So incarceration in GnoME HQ was a nuisance; the Pentax had to stay in its bag.

The best I can offer is a blackbird taken on Monday – nothing exotic, but I'm pleased with the detail in the feathers. 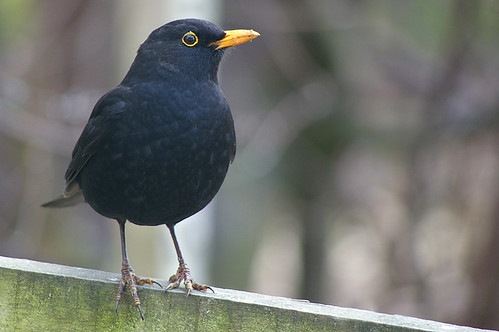 Matchgirl is still delighted with her new acquisition, but less happy with the name I gave the wondrous machine this morning. I've been told that on no account is her Mini Cooper to be called Alice. You have been warned.

We made our final journey in Ms Puma first thing this morning, after which the former apple of Matchgirl's eye was abandoned with barely a qualm at the rear of Calterdon, the Mini dealer in Inverness.

Less than an hour later – after a wait for her personal salesman, several reams of paperwork, instruction on all the bells and whistles to be found in her gleaming dream machine, including the fancy push-button engine-start, and presentation of a complementary basket of flowers – she drove off the forecourt. The heavy clunk we heard was the depreciation that fell off the back of the brand new, 10-reg car.

Surprisingly, the rest of the day wasn't spent behind the wheel, for apart from a brief shopping detour we returned straight home. I suspect that a more thorough Mini adventure will take place at the weekend, weather permitting.

In the meantime, Matchgirl will read her manual from cover to cover to familiarise herself with vital information that includes bluetooth settings for her phone and how to connect her iPod. She's easily amused.

So am I, which is why more bird snappery took place today. Nothing of great exoticism was seen but a couple of photos survived quality control. Here's one of them. 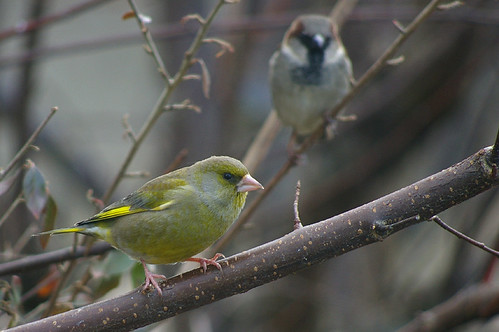